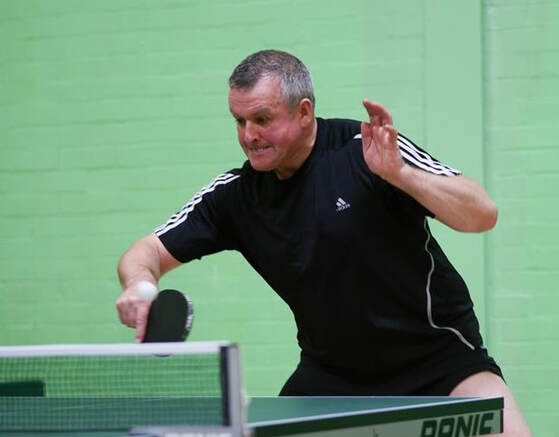 Stuart in typically determined mood! Photograph by Gordon Muir, at the Edinburgh Championships on Saturday 6th December 2015.
There is a general sense of sadness and disbelief within the Edinburgh International table tennis club and ELTTL at the news of the sudden demise of Stuart Macdonald on Sunday 29th March. He was 56.

On Sunday night on either his way to or from a late-night jog, Stuart parked his car in the car park at Sainsburys or something similar near Marchmont. He was then taken ill, but luckily passers-by noticed that he had collapsed and called an ambulance. Stuart was taken to the Western General Hospital, but he could not be revived and died at about 10:30pm, before Carol, his wife of 20 years, could get to the hospital. The cause of death was a heart attack.

His funeral was held on 14th April attended by close family members and friends from ELTTL.
​
Stuart had been part of the club for many years and served in the committee and contributed to the growth of the club in a number of ways. He supported in maintaining the club website and various promotion campaigns. He was always very keen to improve to ensure the club focuses on members’ development, structured practice sessions and coaching. He was one of the most dedicated members who would practice every week and keen to improve his own personal game and others. His son, Struan was also part of our club for a brief period and enjoyed table tennis as much as his dad.
Stuart’s career in the League
We should salute Stuart’s performances in the Edinburgh and Lothians Table-Tennis League since he joined Edinburgh International Table-Tennis Club in the 2014-15 season.

It’s relatively easy for youngsters to improve, but to increase his percentage of matches won by more than ten percentage points over his previous best percentage is no mean feat for an adult. This season just ended he played in all 19 of Edinburgh International IV’s fixtures, and would have played in the final two fixtures had those not been cancelled because of the Coronavirus.

If we look at the final Player of the Match votes for all players over the whole 2019-20 season, we see that Stuart with eleven votes features highly. Stuart also has more votes than anyone else in the club, and indeed Stuart’s eleven votes are more than those of both his teammates combined (eight). This was because Stuart proved to be the most consistent team member over the season, particularly when facing the better teams, against whom he nearly always won two out of his three singles matches. That, more than just the average of 66.67%, indicates his mental strength – the best players play their best against the strongest opponents.

Stuart’s career in the Handicap Cup

We will miss him as a doughty table-tennis player, with a very ready smile and an almost-permanent twinkle in the eyes, as a gentle man despite his very obvious physical strength, but he had a greater presence in his work as a Digital Archivist. However, the gap that his passing leaves at table-tennis and at his work is as nothing compared to the chasm that now exists in his vastly more important life role as a husband and father of still-young children, to whom boundless sympathy.
It hurts to think that we will never be able to play with you ever again.
RIP team mate, mentor, friend.
​
[Edited by Anand Sundaram. Original contributions from members of EITTC, Euan Rae, Aneta Wallace, Tommy Toner, Alan Easton, Murray Wilson and Robert Inder. Thanks to all for their contributions]