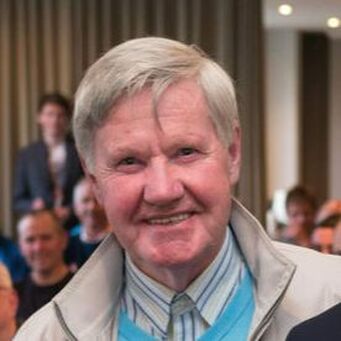 ELTTL members were saddened to hear of the death-after a short illness- of one of its most popular figures, Tommy Sutherland Snr.

There was a fantastic turnout for Tommy's funeral at Warriston, including a large contingent from Corstorphine TTC and the ELTTL (including league President, Lindsay Muir, Vice President Alan Easton and ex-Presidents Ken Benjamin and Ken Codogan), with Richard Yule representing Table Tennis Scotland.

Those present heard about Tommy's birth at The Elsie Inglis Memorial Maternity Hospital in Abbeyhill and his mother's tragic death in childbirth. Tommy was brought up by his grandmother in Henderson Street (Leith) and Colinton Children's Home. He was evacuated during the war to Perth. As a youngster he was a member of the Boys' Brigade and was keen on sport-football, cricket and particularly table tennis. Despite being unable to ride a bike his 1st job was as a delivery boy for a local grocer. Leaving school at 15 he joined an engineering firm before he became a joiner working on ship furniture. During his National Service with the RAF he was stationed in Northern Ireland.

He met his wife Sheila in 1960 at the Locarno Ballroom, Slateford Road. In 1970 they moved from Murieston Road to Saughtonhall Drive. Tommy subsequently worked as a joiner for St. Cuthbert's Co-op before working as a self-employed window-fitter. In 1985 he started as an Edinburgh/ Lothian Council building inspector- a job he held till he retired. He was an active member of the local churches in the areas he lived and was also involved with Corstorphine Community Centre. He was a big sports fan and enjoyed football (he was a Hearts fan), cricket (playing for Corstorphine CC in the East League for many seasons) and, of course, 'his biggest passion' - table tennis.

He began playing TT above an ice cream shop in Ferry Road where people like Scottish internationalist Helen Houliston also played.  He enjoyed playing the game as well as the 'social side of the game' and encouraged generations of youngsters to take up the game. He played at North Merchiston, Corstorphine and was-in recent- months involved in the Pop in and Play venue at South Gyle Shopping Centre.

Tommy was a prominent figure in Corstorphine TTC which started in 2008, often involved in their junior coaching.  Prior to that he played for North Merchiston  (topping the Division 6 averages in season 1990/1, helping North Merchiston VII to the Division 6 title) and also topped them in 1979-80, when playing alongside his sons Tommy and Graeme. He also turned out for the City Transport club (based at the Foot of the Walk) during the 1980s and United Crossroads. He was a member of a Handicap Cup winning team in the 90s.

Until very shortly before his death he was involved in the Pop In & Play at South Gyle Shopping Centre-welcoming new players and still hitting a decent ball. He played in the ELTTL right up to a few weeks before his death and was due to play a Handicap Cup match (alongside his son Tommy and grandson Shaun) the week of his passing but wasn’t feeling well. He told his son from his hospital bed that they’d better win as he would play next round. They were 3-0 down and Tommy Jnr said to Shaun: ‘we’d better win here or we will get hell from Snr!’. They then won the match 5-3.  Tommy’s passion for the game clearly runs through the family.

Tommy was awarded Table Tennis Scotland Honorary Lifetime membership in 2015, which he received at the ELTTL AGM of that year. His legacy lives on through his sons Tommy Jnr and Graeme-one of the top players in the ELTTL for over 3 decades (Scottish Junior Champion in 1982)- and by grandson Shaun. He'll be much missed by his large family, his friends and Edinburgh's table tennis community.

Since his death many tributes have been paid. John Lodge of Cortorphine TTC described him as ‘a lovely chap, generous in his ways.  Fond memories of his mischievous smile’. Tom McKenzie described him as ‘a stalwart of Edinburgh Table Tennis and we will all miss him’. .John McCulloch of West Lothian TTC said there’s ‘no doubt that his friendly face will be sorely missed ….but it's good to know that his TT legacy will live on through his family’.

The photo (by Gordon Muir) shows  Tommy Sutherland Senior
(Corstorphine) receiving his Table-Tennis Scotland Honorary Lifetime membership at the ELTTL AGM at ESC in May 2015.